How does firing an electric kiln compare to the use of a home appliance (such as a water heater) in energy cost?

Find the Kiln Wattage which may be written on the kiln or in the manual (or multiply volts x amps of the kiln to calculate the wattage). Energy is measured by the electricity companies in kilowatt-hours, so divide watts by 1000.

The medium Skutt 1027 has a rating of 11.52 kW. To find this much energy this kiln uses for one firing to cone 6, multiply the kW by the duration of use. Electric kilns’ elements cycle on and off during a firing to control the ramp of temperature rise. Skutt estimates that most kiln cycles are only “on” for about half of the duration of the firing. For a 12 hour firing to cone 6 we can assume it is only on for 6 hours (11.52kW x 6hours) this kiln uses 69.12 kW.

In comparison, a typical electric water heater uses 4 kW per hour and is on for about 3 hours a day for total monthly usage of 360 kW. To match the amount of energy used by a typical water heater in one-month, a medium electric kiln could fire to cone 6 a total of 5 times.

To put all this information in terms of greenhouse gases emitted use this calculator from the EPA. The medium kiln which uses about 69 kW for a 12-hour firing is equivalent to 121 miles being driven by an average passenger vehicle or 54 pounds of coal burned.

Article By Aaron Nelson from “Sustainable Ceramics” by Robert Harrison

How much energy does it take to fire a ceramic cup? 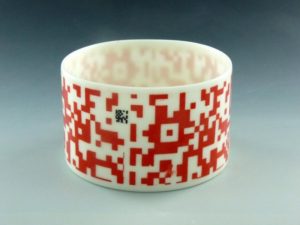 Aaron Nelson is the Artistic Director of the Medalta Artist-in-Residence program in Medicine Hat, Alberta Canada. Aaron was previously the Clay Business Manager of the Archie Bray Foundation. His extensive knowledge of ceramics materials and his commitment to sustainable issues continue to impress. Aaron Writes:

How much Energy does it take to fire one cup? Is the act of turning clay into ceramic a sustainable practice? Where do the raw materials come from? What is the exact relationship between ceramics and glass? These are all questions that I have come to ask myself as my interest in the production of objects (I spent many years as a potter) has expanded to a more conceptual understanding of how these objects are produced and how they fit into contemporary dialogues around consumption. These questions have directed my research towards the formulation of an energy-efficient material, which is more glass than clay.

Having worked with porcelain for a number of years I was interested in the aesthetics of translucency. Combined with my interest in energy conservation I have been developing a material loosely based upon the Renaissance prototypical porcelains known as the Medici porcelains. The material that I am currently working with matures at 1045°C [1913°F], is extremely translucent and has many qualities associated with glass. It fires to temperature in just over three hours. Currently, my research has been directed at fluxing the body with over 50% post-consumer material in the form of various types of recycled glass.

Below is a very simple breakdown of the energy required to once fire this small porcelain cup to 1045°C [1913°F].

So if you are watching the big game, drinking a pot of tea and eating doughnuts you are consuming about 2,000 watts of energy, enough to fire three cups!

If you amortise the energy required to fire the cup over the average lifespan of its useful life of an average of 50 years it takes about 13 watts per yeat, about what a standard compact fluorescent bulb consumes in one hour. Aaron’s research has convinced him that the act of turning clay into ceramics can be incredibly efficient and consumes relatively little energy.

Using the same line of logic, how can we better understand the carbon impact of gas kiln firings? A soft brick gas kiln uses approximately 10,000 BTU’s per hour for every cubic foot for a cone 10 firing. A 30 cubic foot kiln will use 300,000 BTUs per hour to reach cone 10. Because you do not use the gas at full power for the whole firing, we will calculate for 6 hours of full power. To reach cone 10 in our 30 cubic foot kiln it will take 1,800,000. This is equivalent to about 18 therms of energy used. This firing would match the greenhouse gas emissions of a car driving 236 miles.

“With regard to atmospheric firing, I worked in a studio that used an Olsen Fast-Fire wood kiln. While the results were not superlative by wood-firing standards, it did fire a nice cone 10 reduction. It seems plausible that a quick-firing wood kiln or a gas-assisted wood kiln could be adapted for reduction, soda, or salt firing. By using wood from the scraps generated at a lumberyard or mill (they even delivered them to the studio I worked in), waste from a renewable resource is repurposed while reducing reliance on fossil fuels. If you are fortunate enough to own wooded property or have access to a school forest, it may even be possible to harvest trees in a manner that increases the health of the forest while providing fuel for your kiln. This same forest could offset the emissions produced by firing kilns.” – Jennifer Harnetty From Ceramics Arts Daily

Salt firing has a byproduct of hydrochloric acid. Produced largely by the burning of coal, the acid enters the atmosphere and is deposited into the soil via precipitation changing the acidity affecting soil nutrient cycles. How do we put the amount of acid produced by salt firing in the context of another acid-producing process?

“Sustainable Ceramics” by Robert Harrison, addresses this question. Wil Shynkaruk conducted research on salt and soda firing’s impact on the environment. After working with a team of a chemist, they determined that in the worst-case scenario a 24 cubic foot salt kiln fired and salted 12 times would produce roughly the same amount of acid as a single-vehicle does in two months of typical driving in the United States. See the book for more details about his research.

Stefan Andersson’s veggie oil burner system. He uses a low pressure siphon nozzle operating in the range of 20-60psi. He preheats the oil to 50 degrees celsius. The whole process uses about 30 litres of veggie oil (wvo) to achieve stoneware temperatures in a mixed reduction/oxidation firing.

Check out this feature on Dawn Soltysiak and Solar Powered Kilns.